I am originally Christian and for the last year I have been discovering Islam. I have now stopped going to church and I am missing prayer very much, and I would like to pray in a Muslim way - however, I am not yet ready to convert fully and accept all the teachings of Prophet Mohammad (peace be upon him) as I still have many questions un-answered. Is it allowed to perform Salat (prayer) and go to a mosque without being a Muslim? Many thanks in advance for your reply. 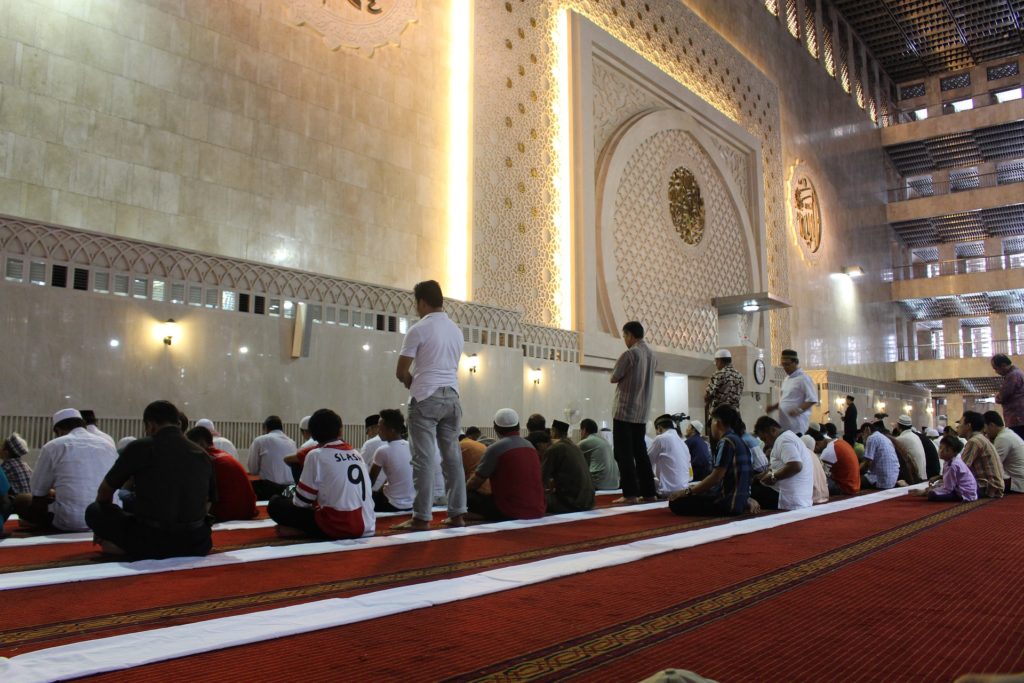 To start with, the answer is: Yes! You could pray the way Muslims pray, for sure. These prayers belong to God and not humans, whoever they are. No Muslim should assume some sort of ‘monopoly’ over the way of prayer that Prophet Muhammad (peace be upon him) taught humanity.

In fact, Muslims believe that Prophet Muhammad (peace be upon him) merely revived prayers, fasting, and acts of worship that believers before Islam used to practice in the original versions of their faith. In fact, I think that you have got to ‘try’ to pray (and fast) the Muslim way and try to discover for yourself the feelings and spirituality associated with these ways of praying and fasting, etc., whether in their individual or collective forms.

In the mosque or the ‘house of worship’, and ideally speaking, you will meet pious people, witness many acts of charity, and find the light of belief. God says in the Qur’an about His own Light:

God is the Light of the heavens and the earth. The parable of His light is, as it were, that of a niche containing a lamp; the lamp is [enclosed] in glass, the glass [shining] like a radiant star: [a lamp] lit from a blessed tree – an olive-tree that is neither of the east nor of the west the oil whereof [is so bright that it] would well-nigh give light [of itself] even though fire had not touched it: light upon light! God guides unto His light him that wills [to be guided]; and [to this end] God propounds parables unto humans, since God [alone] has full knowledge of all things.

In the houses [of worship] which God has allowed to be raised so that His name be remembered in them, there [are such as] extol His limitless glory at morn and evening – people whom neither [worldly] commerce nor striving after gain can divert from the remembrance of God, and from con­stancy in prayer, and from charity: [people] who are filled with fear [at the thought] of the Day On which all hearts and eyes will be convulsed, [and who only hope] that God may reward them in accordance with the best that they ever did, and give them, out of His bounty, more [than they deserve]: for, God grants sustenance unto whom He wills, beyond all reckon­ing. (Qur’an 24:35-38)

However, frankly, I would like to mention to you that any mosque is a mirror of its local community. In Islam, mosques do not have any divine or doctrinal status, as it is the case in many Christian churches. A mosque does not represent God or Islam; it only represents its Muslim local community. It is, more or less, a community place that is opened for their collective prayers, in addition to their social events and community functions, etc.

I do not know exactly which mosque you will visit in order to pray, and thus, I do not know whether the local community of that mosque would be friendly and opened to people from outside the community, or otherwise. So, if you happen to feel uncomfortable in a mosque that you visit, try another mosque. In addition, pray at home as well. Prophet Muhammad (peace be upon him) said: “Offer some of your prayers (Nawafil, non-obligatory) at home.” (Reported by al-Bukhari)

On the other hand, various Muslim cultures in various mosques are adamant about a certain outlook for all women attendees. Therefore, when you go to the mosque, try to adhere to this outlook, whatever it is, merely out of respect to the local community. It is also a good opportunity in the mosque to try to make new Muslim friends and find answers for your questions.

However, accepting Islam does not mean to have all your questions ‘answered’. To become Muslim, you must believe in what is called the ‘six pillars of belief’. These are: 1) One God, 2) God’s Prophets (including Jesus and Muhammad), 3) God’s Holy books (which He had sent to these prophets), 4) the hereafter, 5) angels, and 6) that God created everything that had happened and everything that is destined to happen.

If you believe in the above, then you are Muslim (a good translation of the word ‘Muslim’ is: a believer), and the rest is details. The search for answers for these detailed questions could continue within Islam.

From my experience with questions about Islam, I find that many questions that remain ‘unanswered’ are related to certain historical factors, being political, social, cultural, or even environmental. The problem is that many Muslims, including some Muslim scholars, do not recognize these historical dimensions of some of the Islamic rulings, and hence fail to offer reasonable and adequate answers to important questions. This leads to confusion in the minds of many seekers of the truth, Muslims and non-Muslims alike.

For example, some of the common difficulties that many non-Muslims have with Islam are related to the issue of the status of women in the Islamic law. However, a closer look at many of the popular rulings concerning women will reveal certain underlying historical basis for these rulings that are, today, non-applicable, such as certain guardianship patterns, marriage customs, or acceptable costumes. These things are subject to change, as long as the principles and moral values behind them are fixed and preserved. Islam is about these principles and moral values; not about the specific manifestations that they take in certain cultures in the past or present.

What I would like to say here is that such unanswered questions, as long as they are not about the basic pillars of belief mentioned above, do not affect the fact that you are a believer in the Islamic sense. Many Muslims, too, do have unanswered questions of ‘why’ in these areas, including myself. But we all know that the Islamic spirit of knowledge is to keep on searching for the truth and finding answers.